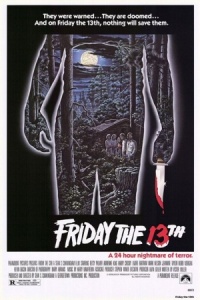 Despite “starring” in ten separate films, going to Hell, New York, outer space and slaying enough teenagers to populate a mid-size country, slasher icon Jason Voorhees was not at the center of the film that started it all, Sean Cunningham’s Friday the 13th (1980). Of sure, Jason’s presence hung over the proceedings, no two ways about it: it just wasn’t his hand on the machete, so to speak. In many ways, Cunningham’s original film is more of a giallo than the brutal slashers that the franchise would evolve into with future entries. Like Hooper’s equally influential The Texas Chainsaw Massacre (1974), Friday the 13th is a fairly maligned film, seen as both bloodier and dumber than it actually is. In reality, Friday the 13th is a lean, mean, well-made and bluntly effective little film and stands proudly next to Carpenter’s Halloween (1978) and Hooper’s Texas Chainsaw Massacre as one of the founding forefathers of the modern horror film.

Story-wise, Friday the 13th is simple enough to almost be an urban legend or cautionary fairy tale. A couple of unsolved murders, along with a host of unexplained accidents and strange incidents, has led to the closure of Camp Crystal Lake for over 20 years. When hippy-dippy Steve (Peter Brouwer) decides to reopen the summer camp, against the concerns of the nearby townsfolk, it’s only a matter of time before trouble rears its ugly head again. This trouble, of course, manifests itself in the form of a heavy-breathing, blood-thirsty killer, a killer that we never get to see thanks to the film’s first-person-POV “kill scenes.” As a co-ed group of camp counselors busy themselves with renovating the camp and exploring each other’s underwear, the mysterious killer picks them off one by one, usually right after they’ve been engaging in a little of the ol’ fornication. In time, only Alice (Adrienne King) remains alive: will she be able to uncover the identity of the anonymous slasher or will she end up as just another maimed body stuffed into a cabin?

Within that amazingly simple setup, Cunningham, cinematographer Barry Abrams, composer Harry Manfredini and makeup/sfx guru Tom Savini work some pretty impressive magic. Indeed, it’s the combined forces of these four that go a long way towards explaining the power and continued impact of the film. Thanks to Abrams evocative camera-work and Cunningham’s sure-handed direction, the film manages to maintain a constant atmosphere of tension and creeping dread. Manfredini is responsible for that iconic score: it’s almost impossible to watch a slasher film, nowadays, and not immediately think of that classic “ch ch ch ka ka ka” effect. Elsewhere, Manfredini’s score builds and sets mood in as effective a way as Carpenter’s score for Halloween: like Halloween, Friday the 13th would be a much different, less effective film without its score.

Savini’s role, of course, could never be overstated: quite frankly, Tom Savini is one of the most gifted, influential makeup/sfx artists in the entire history of cinema and he elevates any film he’s involved with. In the case of Friday the 13th, Savini’s expert makeup and effects work really gives the film something to hang a hat on: while the film isn’t overloaded with pointless, gratuitous gore, it also doesn’t shy away from the red stuff: who could forget the scene where poor Jack (Kevin Bacon, in his big-screen debut) gets an arrow pushed through his throat or Marcie (Jeannine Taylor) takes an ax to the forehead? Although future entries in the series would play up the creative kill scenes to the point where they became the entire focus of the films, the kills in the original film are so well-staged and impactful that they have a resonance the rest of the franchise can’t possibly match.

As mentioned earlier, the original Friday the 13th actually plays out more like one of Mario Bava or Dario Argento’s giallos than it does a “traditional” slasher film. In particular, one can see how much of an influence Bava’s Bay of Blood (1971) had on Cummingham’s film, both with regards to the kill scenes and the film’s overall style. There’s a mystery at the heart of Friday the 13th and, even though it might not be a particularly tricky one (we find out the identity of the killer by virtue of them being the only person alive aside from Alice, which is roughly equivalent to one of Matlock’s “confession on the witness stand” denouements), it still separates the film’s from the packs of “dead teenager” films that followed in its wake.

Acting-wise, the film is no worse and markedly better than many other slashers: most of the cast acquits themselves quite ably, although Kevin Bacon is a bit to backwoodsy for my taste and Adrienne King tends to wear out her welcome just a little by the time the film’s finale rolls around. Nonetheless, she’s a more than fitting “final girl” for much of the film’s running time and manages to be a bit more proactive than “cower in the corner, screaming and crying,” although she manages to do enough sustained whining to last a lifetime. Betsy Palmer ends up being the real star of the show: a TV and theatrical actress, Palmer brings an essential blend of insanity and maternal compassion to her performance as Mrs. Voorhees and her sustained cat-and-mouse chase with Adrienne King is one of the film’s unmitigated high points. Palmer is also the source of some of the film’s best behind-the-scenes stories, including the one where she actually started to beat up and throw poor King around for real, so caught up was she in the fictional action.

In fact, the filming of Cunningham’s cult classic is interesting enough to serve as its own film: fans of the franchise or filmmaking, in general, would be well-served to pick up the exhaustive coffee table book, Crystal Lake Memories: The Complete History of Friday the 13th. Even though the F13 series was never my favorite of the “classic” franchises, the book is filled with so many great stories, interviews and anecdotes that it really did give me a whole new appreciation for the series. There’s also a filmed version of the book, although I must admit to not seeing it, at least yet: if they can distill even one-tenth of the fun from the book, however, I’m assuming it’s also a must-see.

For many, Friday the 13th is a film that exists more on reputation than anything else: modern audiences seem to approach many of these classic films, including Halloween and The Texas Chainsaw Massacre as museum artifacts, pieces of history that were more instrumental in forming the foundation for modern horror than relevant as pieces of art, in their own right. This seems to be why modern remakes of these films are so prevalent nowadays: modern audiences and filmmakers appreciate the “sentiment” behind the films but find them too quaint for current tastes. This, of course, couldn’t be more wrong or reductive: there’s absolutely nothing wrong with these older films…it’s just that modern audiences have become more than a little jaded and lazy.

When examined on its own merits and removed from its role as a musty relic, Friday the 13th actually stands pretty tall: it’s certainly no worse than many horror films in the class of ’79/’80 and is quite a bit better than many of its peers. Like Halloween and The Texas Chainsaw Massacre, Cunningham’s film has a purity of vision and purpose that’s all too refreshing in an era when meta-narratives have become the default for almost every genre film. The film is clear and uncluttered, moves at a pretty breakneck pace and features a fairly decent twist ending (cribbed from De Palma’s version of Carrie (1976) but what are ya gonna do?): when compared to more generic, faceless slashers, the original Friday the 13th is practically a Kurosawa film.

While it’s a little harder to completely defend all of the films in the franchise (Friday the 13th Part 2 (1981) is actually quite good, although the series tends to dissolve into muck fairly quickly after the third entry or so), the film that started it all is an absolute classic: genuinely frightening, full of great setpieces (the scene where Marcie explores the creepy restroom is amazing), great effects and effective performances. We may only see Jason as a drowned rat in the first film but the movie feels all the more powerful for his general absence. Mr. Voorhees may have gone on to become a superstar, in his own way, but the original film is the real star attraction of the franchise, hockey mask be damned.