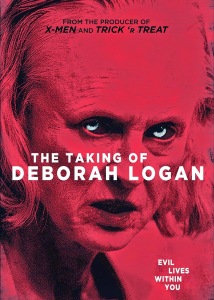 Anyone who’s ever watched a loved one succumb to Alzheimer’s knows that the disease is a true monster that rivals anything the brightest stars in horror can dream up: formerly brilliant minds revert to a state of petulant childhood, life-long lovers forget the partner who’s been by their side for decades and, eventually, the victim’s body betrays its own basic functions and forgets such prime directives as “Eat” and “Breathe.” The deepest, most enduring tragedy of the disease is the way it makes the familiar alien to us: when all that we ever really carry with us is our memories, Alzheimer’s ends up being the most lethal, insidious thief of all.

Despite the inherently horrifying nature of the disease, cinematic depictions of Alzheimer’s are almost always delivered as tear-jerking dramas, stories of families in crisis, bittersweet ruminations on life-long love running its course, etc…Thanks to writer-director Adam Robitel, however, the world of cinematic horror finally has its first “Alzheimer’s disease”-related film: The Taking of Deborah Logan (2014) is a found-footage film that purports to examine someone suffering from the effects of Alzheimer’s who may also (or may not) be suffering from some sort of demonic possession. While the film’s angle is pretty unique and the first half manages to offer up some nicely subtle chills, however, Robitel’s feature-length debut winds up collapsing into a mess of lazy Blair Witch Project (1999) and Paranormal Activity (2007) clichés by its final act, squandering much of the good will that the film earns along the way. Nonetheless, The Taking of Deborah Logan certainly earns points for finding a more unique subject to exploit” than the same moldy old haunted house/moving furniture tropes that have been de rigueur in found-footage for the past 15 years or so.

Right off the bat, we’re greeted with text that explains that the film we’re about to see has been cobbled together from various footage sources and has been “lightly” edited and spruced-up: a vague bit of base-covering that, essentially, gives a pass for any and all unexplained angles, non-digetic sounds, etc…that we’ll be encountering. It’s also, by its very nature, a rather lazy approach to the format and the first (of many) warning signs that this particular way will be a rocky one. In a nutshell, medical student Mia (Michelle Ang), along with crew members Gavin (Brett Gentile) and Luis (Jeremy DeCarlos), wants to make a documentary about Alzheimer’s patient Deborah Logan (Jill Larson). Deborah’s grown daughter, Sarah (Anne Ramsay), is eager to get the filmmakers involved, since they’ve offered to help pay for her mother’s increasingly expensive medical care. When the formerly on-board Deborah suddenly decides that she values her privacy more than the assistance, however, all signs point to Mia’s documentary being D.O.A.

There wouldn’t, of course, be a movie without a change of heart, however, the crew are invited back a week later to begin filming their project. At first, everything seems pretty normal: Deborah is certainly more forgetful than the average person but there doesn’t seem to be anything too terrible going on. In short order, however, we see just how fast Deborah is stuck in the sticky web that is Alzheimer’s: she begins to forget basic things about her own daughter and past, has mood changes on a moment’s notice and has started to let her own hygiene slide. As Sarah tries to help her mother retain as much of her personality as she can, we witness the heartbreaking ways in the disease breaks down both its victim and her caregiver: as Mia notes in one of her documentaries many talking points, caring for an Alzheimer victim can alter the caregiver’s brain chemistry, as well, making the terrible disease a truly lose-lose proposition.

Just when it seems as if The Taking of Deborah Logan might be the world’s first found-footage-styled “after-school special,” however, things begin to take a turn for the sinister. Cameraman Gavin happens to spy Deborah doing some odd things with a snake and the older woman seems to develop a habit of appearing right behind folks, scaring the everlovin’ shit out of them. Things really come to a head, however, when Deborah completely flips out and accuses Gavin of stealing her beloved garden trowel: she chases him around the kitchen with a large butcher knife, cornering him on the counter and very nearly costs everyone involved several fingers. After taking her back to the hospital and the kindly Dr. Nazir (Anne Bedian), Sarah gets the worst news possible: her mother’s condition is deteriorating at an ever more rapid rate and she’s losing more of her brain on a daily basis. The end, as Sarah knows all to well, may be over the next horizon but it’s getting closer by the minute.

Deborah’s condition may be terrible but Mia and the others begin to notice a frightening pattern: Alzheimer’s explains some, but not all, of the things that are happening around them. Snakes start popping up everywhere, Deborah has taking to painting a series of pictures which depict a mysterious, black figure moving ever closer to their house and she’s developed an alarming propensity for what medical experts must surely dub “scary, intense and gravely demon voices” (take two pills twice a day, as needed). After a truly creepy incident involving Deborah’s patented in-home switchboard system, Mia and the others come to think that someone else might be responsible for Deborah’s more violent tendencies: specifically, they come to believe that poor Deborah is possessed by the spirit of serial killer Henry Desjardins (Kevin A. Campbell), a pediatrician who mysteriously disappeared after killing four children as part of an immortality ceremony.

As Deborah’s behavior becomes more and more extreme, Sarah is truly backed-up against a wall: she could barely care for her mother before creepy paranormal shit started happening and this all just seems like one cruel cosmic joke, especially when everyone from the local priest to the college’s expert in anthropological studies seems unable to give her any assistance. Is Deborah actually possessed by the spirit of an insane killer or is her Alzheimer’s just getting exponentially worse as time goes on? What’s up with all of the snakes that seem to be popping up everywhere? Could there be another, darker, mystery at the heart of everything…a mystery that could potentially unravel our comfortable belief in a rational world and give us a front-seat to our own demise? What is actually taking Deborah Logan: an unstoppable disease or pure evil?

For roughly the first half of the film, The Taking of Deborah Logan is a really well made found-footage film, albeit one that doesn’t do much new with the sub-genre, aside from the subject matter. That being said, the early found footage aspect of Robitel’s film is quite strong: in particular, I really liked the pseudo-documentary aspects of Mia’s film, such as the computer-aided infographics, actor reenactments and talking head interviews. Unlike other found-footage films that aim for a pseudo-doc feel, The Taking of Deborah Logan actually feels like the real thing: kudos to Robitel for managing to nail the tone/look so spot-on.

The acting is also quite good across the first few acts, with Jill Larson turning in a massively impressive performance as the titular character: her ability to vacillate between sweet, angry, forgetful and prideful is absolutely essential to the success of the character and Larson pulls it off quite handily. There are moments in The Taking of Deborah Logan that are absolutely heart-breaking and it’s all down to Larson’s incredibly subtle, expressive performance. Once she gets more bonkers in the latter half of the film, her performance begins to seem a bit more heavy-handed but the early going is quite masterful.

If only the same could be said of Anne Ramsay’s performance as Sarah, however. Ramsay comes into the film “turned up to 11,” as it were, and her performance only gets more strident as the film wears on. By the climax, both Sarah and Mia are so shrill, giddy and obnoxious that I spent the final 15 minutes secretly hoping something would bump off both their characters, a pretty extreme switch from rooting for them a mere 20 minutes before that. Ditto for Gentile and DeCarlos’ unlikable turns as Mia’s film crew: neither character ever gets more to do than utter tired variations on “Oh, hell no!” and the script saddles DeCarlos with one of the awful “these crazy white people” asides that’s a real head-smacker. I’m also not sure what’s going on with Ryan Cutrona’s performance as next-door-neighbor Harris: not only did he never really seem to factor into the story, his motivations and personality also seemed to change on the drop of a hat, based on whatever the script needed him to do…nothing quite like a character who might as well be named “Johnny Plot Contrivance.”

As mentioned earlier, the subtle, sparse quality of The Taking of Deborah Logan’s first 40 minutes ends up getting thrown completely out the window in the last half of the film, resulting in endless scenes where characters look through a camera viewfinder while running down endless, anonymous dark tunnels, as well as those now ubiquitous “stationary cameras recording while everyone sleeps” clichés that seemed to spring fully formed from Paranormal Activity like Athena busting out of Zeus’ cranium. None of it adds anything new to the format whatsoever and the film even manages to end with one of those moldy “or are they…evil?” “twists” that’s probably only novel for folks that have been in comas for the past several decades.

Despite how disappointing the film becomes, however, there’s plenty to like here, including a thoroughly gonzo, kickass scene during the climax that involves one of the characters spitting acidic venom and distending their jaw like a snake in order to swallow someone whole: suffice to say that my resulting upraised fist probably knocked a big chunk of cheese out of the moon. On the whole, however, The Taking of Deborah Logan ends up being just another found-footage film, full of all of the same problems and clichés, albeit with slightly more imagination and invention, than the rest of the unwashed masses. There was enough solid material here to make Robitel’s film easy to recommend, even if the film will always function best as one of the “rainy day” viewings. Nonetheless, give Robitel and co-writer Gavin Heffernan credit for one thing: they have to be the first filmmakers to plant a horror flag in the desolate wasteland that is Alzheimer’s Disease and that, on its own, has to be worth something.