Almost in time for the next installment, The VHS Graveyard now presents Week Three of the 31 Days of Halloween. We came up one film short this week but never fear: there’s still a week left until the big day and plenty of films up on the horizon. Now: kick back, grab a six-pack of blood (or diet blood, if you prefer) and journey back to the wilds of last week as we visit headless horsemen, killer clowns, vengeful ghosts and so much more…right here on The VHS Graveyard.

This zippy adaptation of the classic Washington Irving story captures both Tim Burton and muse Johnny Depp at a point in their collaborative partnership where the well still felt deep and the possibilities endless. Burton is (relatively) restrained, although there are plenty of audacious and thrilling set-pieces (one wonders if the flaming windmill here inspired the similar visual in Windmill Massacre), and the material is allowed to breathe and feel much more organic than later efforts like the Alice in Wonderland films.

For his part, Depp is rather delightful, light years from his smarmy, played-out schtick of the last several years. He plays Ichabod as an eager greenhorn but stops short of playing him for a fool, ala Jack Sparrow, and his interplay with the rest of the impressive ensemble (including Christina Ricci, Jeffrey Jones, Miranda Richardson, Michael Gambon and the always awesome Christopher Walken), is as much about give-and-take as stealing the show.

If you think about it, Sleepy Hollow is the most overtly “horror” film that Tim Burton ever made: gratuitous decapitations, a (relative) lack of whimsy, heavy Gothic atmosphere, deep sense of foreboding…that’s just one Christopher Lee short of a Hammer film! In other words, perfect Halloween fare.

I avoided watching writer/director David Spaltro’s Dark Exorcism for one simple reason: everything about it screamed “generic possession flick” at first glance. As part of my never-ending list of 2016 horror films, however, it was going to get viewed at some point and October 2017 seemed as good a time as any. Turns out I shouldn’t have waited so long: Spaltro’s film is a real sleeper and probably the best indie exorcism/possession film I’ve seen in some time.

A non-believing grad student (Lynn Justinger) and her supernatural-debunking mentor (Fiona Horrigan) meet their match when a terrified mother (Catherine Cobb Ryan) begs for help with her tormented daughter (Grace Folsom). What first seems like a cut-and-dried haunting is revealed to be something much more sinister, requiring a little bit of the ol’ title ceremony. Will the cynical student and burned-out master have what it takes to triumph or will evil be chalking up another win?

Although it never reinvents the wheel, Dark Exorcism is also a breezy, painless experience that manages to avoid most of the pitfalls inherent in exorcism films. Much credit goes to the filmcraft: from the clever opening credit sequence to the colorful cinematography and subtle score, Dark Exorcism always looks and sounds good, even when it takes the occasional foray into the silly or insipid. It does everything that I expect from this kind of film and does it better than most of its peers: that’s good enough for me, neighborino.

Full disclosure: I didn’t care for Ti West’s slow-burn ghost film when I first saw it in theaters back in 2011. Everything up to the finale was fine enough but the climax really ticked me off: I honestly can’t even recall my specific issue but I distinctly remember walking out irritated and let-down. It’s a feeling so strong that I completely avoided the film until this year’s 31 Days of Halloween.

In hindsight, I was wrong. There’s nothing wrong with the ending of this modest tale of amateur ghost-hunters (Sara Paxton and Pat Healy) in a haunted New England hotel. In fact, the whole film is pretty darn good, giving me another reason to like Ti West (for those keeping count, this makes the third of his films that I’ve genuinely enjoyed, right behind In a Valley of Violence and House of the Devil).

If you’re in the mood for an atmospheric, creepy and slow-paced little chiller, go ahead and check-in with The Innkeepers. And remember: there’s nothing wrong with being wrong, kids. 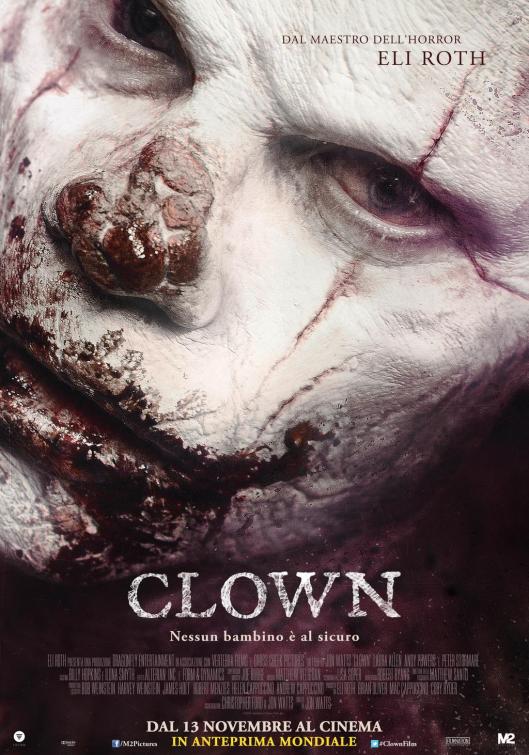 Not much more to say about this modern classic than what I’ve already gushed about in the past but the Cliff Notes version goes a little something like this: Jon Watts and Christopher Ford’s loving tribute to pure horror should be required viewing for anyone who considers themself a horror fanatic and right at the top of the list for those looking for that elusive “truly scary movie.” Beep, beep, Richie!

A doting father (Andy Powers) puts on an old clown costume, as a last-minute replacement for his birthday boy’s absent entertainment, and can’t take the darn thing off. Because, you know, it’s attached to his skin. As his blood-lust grows, the doomed dad discovers that only one dish truly hits the spot: fresh child.

With no hyperbole, Clown is easily one of the best pure horror films since the genre’s heyday in the ’80s and ’90s. Streamlined, mean, inventive, colorful and possessed of one fantastic setpiece after the other, this is in the best vein of films like Pumpkinhead and The Fly: it’s a horror film that centers itself around relatable, likable characters and then builds horror from the tragedy around them. Toss in a phenomenally great origin story for the clown menace and Clown is one of those films that’s just impossible to forget.

The ABCs of Death

As concepts go, The ABCs of Death series has always had one of the best ones: give 26 different filmmakers a letter of the alphabet and free-rein to create whatever associated horror-oriented treat strikes their fancy. It’s a pretty genius concept but, as with almost every anthology film ever, the results are decidedly mixed. In this case, unfortunately, the results definitely tend towards the drearier end of the spectrum.

Personal favorites? Marcel Sarmiento’s sleek and mean “D is for Dogfight,”  Timo Tjahjanto’s impossibly repulsive “L is for Libido,” Helene Cattet and Bruno Forzani’s elegant “O is for Orgasm,” Adam Wingard and Simon Barrett’s silly but effective “Q is for Quack” and Jon Schnepp’s truly demented “W is for WTF.” As for the rest, they range from disappointing efforts from respected filmmakers (Bogliano, Wheatley, Rumley, Vigalondo, West) to shorts that I actively disliked (Noburo Aguchi’s “F is for Fart” and Ti West’s “M is for Miscarriage” are still two of my least-favorite things since I first saw this collection years ago).

All in all, this is a decidedly disappointing first shot across the bow that would go on to produce much more impressive offerings in the second go-around. Still, you really can’t beat the anthology-short format when it comes time to program a little spooky viewing.

When it comes to indie filmmakers, writer/director/actor/producer/studio-head/all-around maven Larry Fessenden is easily one of my all-time faves. Ever since bursting onto the scene in 1982 with his vampire/junkie parable Habit, Fessenden has dedicated his life to indie cinema. His Glass Eye Pix is responsible for releasing more quality genre flicks than any company this side of A24 (I Sell the Dead, House of the Devil, The Innkeepers, Stake Land, Late Phases, and Darling, to name just a few) and he’s the kind of character actor who can handily steal the film from the leads.

As a director, Fessenden has been responsible for one of my very favorite horror films of the last 15 years (The Last Winter) and one of my very least favorite (Beneath). His follow-up to Habit, Wendigo (2001), manages to sit square between those polar opposites. This icy tale of city folks running afoul of backwoods evil (both human and otherwise) is long on atmosphere and features one of the most nightmarishly memorable creatures I’ve ever seen in a film. It owes an obvious debt to Stan Winston’s classic Pumpkinhead but pays it back in some pretty unique ways. It also features one helluva cast: Patricia Clarkson, Jake Weber and Malcolm in the Middle’s Erik Per Sullivan…now that’s an ensemble!

Larry Fessenden approaches the genre from a fan’s perspective and that genuine love shows through in everything he does (including the odious Beneath). Although it misses the high-water mark set by the follow-up, Wendigo is still a fascinating slice of indie horror-psychedelia and handily shows why the filmmaker deserves a lot more acclaim than he gets.

That does it for Week Three of the 31 Days of Halloween: stay tuned for next time, as we screen another batch of new films (including a few that we’ve been looking forward to) and lots of old favorites.