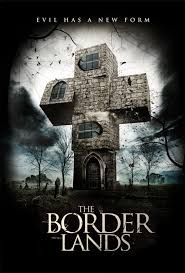 Sometimes, it doesn’t take much to give a particular film a leg up on its competitors. Take writer-director Elliot Goldner’s feature-debut, The Borderlands (2014), for example. For the most part, Goldner’s film doesn’t do much different from the majority of other found-footage horror films on the market but it also doesn’t make many obvious mistakes, either. Add to this some effective performances, along with a creepy, fairly original main concept, and you end up with a pretty winning formula. While The Borderlands doesn’t raise the bar for these types of films, it’s still a suitably sturdy entry and should prove duly thought-provoking for patient horror aficionados.

Goldner’s debut deals with a small team of Vatican investigators who have been sent to a rural British church in order to check on claims of strange, miraculous occurrences. Our team consists of Deacon (Gordon Kennedy), the good-humored, gruff, hard-drinking veteran investigator; Mark (Aidan McArdle) the stick-in-the-mud, uptight, by-the-book priest who doesn’t actually seem to believe in anything; and their tech expert, Gray (Robin Hill), a studied non-believer who still seems more open to the concept of miracles than his religious-oriented cohorts. The group has been called to the small church in order to investigate the resident priest, Father Crellick (Luke Neal), whose claims of strange, unexplained happenings have set off alarm bells in Vatican City. While Deacon and Gray are used to debunking such claims, the case quickly proves itself to be a singularly odd one. For one thing, Crellick is a decidedly weird duck, given to strange proclamations and privy to “visions” that no one else seems to have. For another, the rural church is a ridiculously creepy place, less of a functional religious center than a hold-over from a much older, darker time: as a rule, folks in films should steer clear of anything built “on top” of anything else: suffice to say, it’s always bad news.

As the team continue to investigate, Deacon comes upon a journal, belonging to the church’s 1800s-era caretaker, which seems to hint at some sort of dark presence in the area. After a horrifying incident involving a flaming sheep, the group gets the distinct impression that the locals are a little less than welcoming of this intrusion into their land. Who (or what) is responsible for the mysterious, seemingly paranormal incidents at the church? Is eccentric Father Crellick somehow responsible? Is it all related to stories of ancient pagan ceremonies in the isolated valley? Is someone trying to chase the investigators away from an earth-bound conspiracy or is the reality something much darker and more sinister? As each of the men begins to experience their own strange events, Deacon and the others will be forced to face the unfathomable: if a “miraculous” event isn’t a miracle…what, exactly, is it?

For the most part, The Borderlands (given the unbelievably boring, generic alternate title of “Final Prayer” for American audiences, natch) is an assured, well-made and interesting film, albeit one that makes many of the same (inherent) missteps that most found-footage movies make. While nothing here is as obvious as the many Paranormal Activity (2007) sequels, we still get plenty of scenes that involves the audience intently peering at a static video image, waiting for something to move/jump/make a scary face/etc. Again, not terrible but so old hat, at this point, as to be almost risible. There are also plenty of strangely “unmotivated” camera shots, such as the lovely but out-of-place landscape exteriors, that pop up from time to time: like many found-footage films, the makers of The Borderlands don’t always have the tightest grasp on their “gimmick,” as it were, although this is hardly the sloppiest example of said issue.

Where Goldner’s film really sets itself apart from the found-footage pack is in the quality of its acting. Gordon Kennedy and Robin Hill are both pretty great and make nice foils for each other: there’s a level of shared respect between the two characters that’s nicely illustrated in the performances. Kennedy does the gruff “two-fisted man of God” schtick to a tee and Hill is nicely nerdy and kind of sweet as the tech wizard who only wants to believe, even though he really doesn’t. For his part, Aidan McArdle is appropriately assholish as the immovable Mark but, for some reason, I had the hardest time not seeing his character as a non-secular version of David Mitchell’s odious Mark character in Peep Show (2003-present). Jerks are jerks, however, and McArdle acquits himself nicely as the smug priest/bean-counter.

One of the biggest issues with found-footage films is always the endings: in most cases, they simply devolve into shaky camera-work, motion blurs and the all-important “drop the camera” bit, regardless of what came before. The Borderlands doesn’t (quite) go that route, opting for something quite a bit creepier and more bizarre. While the ending is certainly open for multiple interpretations, I’d like to think that the whole thing is a nod to Ken Russell’s batshit-crazy Lair of the White Worm (1988): it’s probably highly unlikely but who wouldn’t want to throw some props Russell’s way? Regardless of what it ultimately means, however, the ending is just different enough to warrant sitting through the entire film, especially if one is inclined to enjoy found-footage films.

For a debut-feature, The Borderlands is surprisingly good and makes an effective calling card for Goldner. By making good use of a rather unique location, a rarely-used religious angle, some rock-solid acting and a creepy, unexpected climax, Goldner and crew have come up with a film that looks a lot like its peers but has enough individuality and presence to stand on its own. It also features one of the single most disturbing, horrific and unforgettable scenes I’ve ever seen in a film (the burning sheep scene will haunt you, guaranteed), indicating that writer-director Goldner has no problems hanging out in the “dark side,” when necessary. Here’s to hoping that his next feature takes the good will he earned here and runs it in for the touch-down: The Borderlands may not be perfect but I’m willing to wager that Goldner has a pretty fascinating career ahead of him.