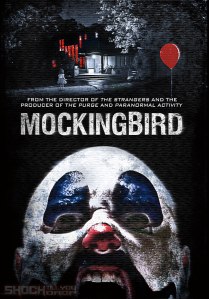 Suppose you received a mysterious, gift-wrapped box containing only a camcorder and a note that said “Keep filming”: would you? If you’ve seen as many horror films as I have, absolutely not. If you’re one of the characters in writer-director Bryan Bertino’s Mockingbird (2014), however, you might: otherwise, of course, you wouldn’t have much job security, now would you? Returning to the big-screen for the first time since his effective home-invasion debut, The Strangers (2008), Bertino turns in a film loaded with foreboding tension, yet slightly too familiar to really set the world alight. There’s plenty of genuine scares to be found, however, along with a truly amazing final setpiece that will stick in your head long after the credits roll.

Utilizing a found-footage aesthetic, Mockingbird weaves together the events of one particularly traumatic evening for three separate groups of people: Emmy (Audrey Marie Anderson) and Tom (Todd Stashwick), a married couple with two young daughters; Beth (Alexandra Lydon), a lonely woman whose just suffered a bad breakup, lives on her own and gets constant phone calls from her over-protective mother; and Leonard (Barak Hardley), an absolutely pathetic loser who still lives with his horrid mother (Lee Garlington) despite being in his mid-twenties. The one thing that seems to unite these disparate folks is the mysterious video cameras that they all receive, along with the various notes that say things like “Keep filming” and “You’re a star.” Emmy and Tom think that the camera must be some sort of prize from one of the endless contests that Emmy keeps entering, Beth has no idea what’s going on but seems happy to be receiving attention from anyone and Leonard’s notes indicate that he’s involved in some sort of competition for $10000: if he successfully completes all of his “tasks,” the cash prize is his, which makes Leonard just about as giddy as a kid on Christmas Eve.

At first, everything seems fairly normal, if slightly strange but sinister elements soon begin to inject themselves into the evening, culminating with the moment where they all realize, separately, that something rather terrible is going on. Once they’re in the middle of everything, however, none of the characters can fully extricate themselves for reasons ranging from saving their family to winning the “game.” As time ticks down towards the “game’s” terrible conclusion, the various groups rush headlong towards a meeting that could involve their salvation…or their complete and total destruction.

Despite being completely unpredictable, Mockingbird is not a terrible original film: rather, Bertino’s sophomore flick functions as a sort of “greatest hits of modern horror,” throwing handfuls of genre tropes at the viewer in an effort to see what sticks. We get home invasion elements (ala Bertino’s previous film), evil video tapes, sinister clowns, children in peril, creepy dummies with automated voices, humiliating tasks for cash rewards, mysterious wrapped packages, found-footage elements, strange videocameras…pretty much the whole nine yards. To his credit, Bertino does manage to mix-and-match these in some pretty interesting ways (despite how familiar the film is, I still wasn’t able to call the ending, which has to count for something) but it’s sort of akin to watching the reels of a familiar film in a random order. I’ll also freely admit that the ultimate resolution made no sense whatsoever and seemed like a rather arbitrary way to tie together the film’s disparate threads: suffice to say that they could have pegged a winged unicorn as the main villain and it wouldn’t have been any more random or out-of-left field than what we get.

For all of the film’s issues, however, it’s still an extremely well-made, exquisitely plotted affair, full of genuine tension and some truly memorable scenes. In particular, the frenzied finale, set in a balloon-filled house to the tune of Grieg’s towering “In the Hall of the Mountain King,” is a complete showstopper: despite how I felt about the rest of the film, the balloon-bit is pretty much as good as modern horror gets and really elevates the film. I also liked how Bertino divided up the film, structurally, via differently colored intertitles (things like “The Family,” “The Woman,” and “Let’s Play a Game”): it was an eye-catching technique but it was also a subtle way to invoke mood and foreshadow via the color scheme. Throughout the film, I never had a doubt that Bertino is a talented filmmaker: despite its obvious budget constraints and found-footage aesthetic, Mockingbird always looks good, although I really wish the dialogue (especially the recorded voices) had been mixed louder…there’s nothing I hate more than riding the volume control on a film, especially when the music and sound effects are set to “stun.”

Ultimately, Mockingbird is well-made, tense and reasonably scary, even if nothing about the film is particularly original or surprising (other than that ridiculous resolution, that is). Come to think of it, I’m pretty sure that I had the exact same reaction regarding Bertino’s previous film, a remake of the French chiller Ils (2006): while it didn’t blow me away, it was well-made and reasonably tense. Same deal with Mockingbird, although this one has the added benefit of that awesome balloon scene: if nothing else, that one segment makes this worth at least a casual watch. At this rate, Bertino has piqued my interest enough to anticipate his next project: here’s to hoping he can wed his talents to something a bit more original, next time.