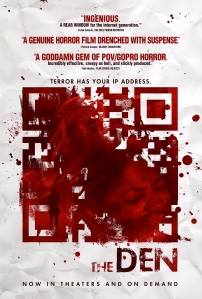 Just about the time that it seems as if all found-footage/1st-person POV horror films will consist of riffs on The Blair Witch Project (1999) ad infinitum, along comes Zachary Donohue’s fairly original and rather disturbing feature-film debut, The Den (2013). Functioning as a cautionary tale, of sorts, about the ways in which our increasingly inter-connected world can end up connecting us to some pretty terrible shit, The Den expands the traditional notion of the 1st-person POV film to include instant messages, email, Google searches, website visits, video chats: in essence, we find ourselves interacting with the same sort of computer desktop interface that most audience members will probably be all to familiar with. Life as art? For our sake, let’s hope the parallels end there.

Our plucky young protagonist, Elizabeth (Melanie Papalia), is a college student who has just received a plum grant in order to study the online socialization habits of our modern world, focusing on the users of a social chatting site known as The Den. As part of her research, Elizabeth is determined to spend as much time on the site as possible and vows to accept any video-chat request she receives. As one can imagine, this leads to the usual variety of bored/horny/strange/naked encounters that one might have on something like ChatRoulette (is that even still around?), along with something a bit more unsettling: while hanging out with her best friend, Jenni (Katija Pevec), Elizabeth happens to stumble upon the user “PyaGrl16,” who’s chat screen consists of nothing more than a smiling still photo of a young woman. After a short, odd conversation, Elizabeth continues about her exploration, thinking nothing more about it.

Over the next few days, Elizabeth continues to have short, strange conversations with PyaGrl16, conversations which seem to vacillate between childlike curiosity and sinister bullying. The situation reaches a frightening, new level when the website appears to develop a mind of its own: Elizabeth’s laptop powers up on its own and PyaGrl16’s smiling avatar becomes an omnipresent force. One night, while Elizabeth is paid a visit by her randy boyfriend, Damien (David Schlachtenhaufen), the website powers up and appears to record their romp through the sheets, a video of which is later emailed to the faculty members responsible for her grant. Soon, Elizabeth finds herself needing to defend her character, all while PyaGrl16 becomes more and more aggressive. When Damien appears to be abducted from his vehicle while chatting with her, however, Elizabeth realizes that the situation may be more dire than she originally thought. She’s right, of course, as we soon see when everything spirals into a hideous web of abduction, torture, deceit and the cruelest of all forms of entertainment. As Elizabeth will come to learn, the dead eye of the webcam never really sleeps and we all might be horrified to realize just who’s hanging out on the other end.

Right off the bat, The Den’s structure and format ends up working wonders, breathing a fresh bit of air into a decidedly stagnant subgenre. The film clips along at a pretty breakneck pace, aided immeasurably by the constant flow of new information on the screen: while the various computer screens, instant messages, pictures-within-pictures, etc…start to feel overwhelming, at times, the narrative never feels clogged or unnecessarily convoluted. While I’m probably one of the least technologically savvy folks out there, I never felt lost in all of the discussions of social networking apps, catch-phrases, etc…it’s all integrated in a pretty seamless fashion and hooked me fairly easily.

One of the single most important aspects of a horror film, of course, should be the ability of said film to induce fear and it’s here that The Den finds its greatest strength: the film is genuinely scary, particularly for anyone who spends an inordinate amount of time online. There’s something inherently creepy about that eternally smiling picture of the young girl and Donohue uses it in a similar fashion to the creepy doll from the Saw series, as a harbinger of ill things to come. While parts of the film tend to devolve rather quickly into torture-porn nastiness, much of it is still more concerned with developing a claustrophobic sense of paranoia than forcing viewers to play chicken with the images on the screen: one of the most heart-stopping moments is the one where Elizabeth’s laptop suddenly turns on, right to that damn, smiling picture. It’s a great, subtle moment, one which, thankfully, isn’t a one-time occurence.

In fact, one of the single greatest strengths of The Den is the way in which its format effectively pulls the viewer into the film. In an era when more and more people are watching feature films on computer screens, The Den is one of the first films that practically demands to be seen this way: watch the movie on a laptop, in the dark, and see how often you end up looking over your shoulder. It’s a film that, like the best and most prevalent urban legends, preys on all of our worst fears and assumptions regarding the Internet: despite what we’re “told” we all “know” that there’s an army of faceless, anonymous predatory monsters just lurking on the other side of our computer monitors, waiting to drag us away into the shadows.

While the acting varies in effectiveness, ranging from pleasingly underplayed to obviously amateurish, Melanie Papalia is consistently likable as our inquisitive heroine, so much so that her inevitable fate feels more impactful than similar plot devices in similar films. Elizabeth never comes across as overbearing or obnoxious, character traits which can certainly be attributed to other found-footage protagonists: suffice to say that she’s a much better person to be lost in the woods with than Heather Donahue and we’ll leave it at that.

While The Den has a lot going for it, it’s also exceedingly unpleasant and, as mentioned above, more than a little torture-porny. The atmosphere is consistently grim and oppressive but it can almost be a bit too much, at times: there really isn’t anything here to lighten the mood (unless one counts Elizabeth’s silly, throw-away encounter with one of those “Nigerian prince” scammers, that is). That being said, this particular aspect is also what makes the film so effective as a horror movie: it’s utterly relentless, especially once the ground rules are established, and plunges at breakneck pace towards its effective (if slightly familiar) twist ending.

In a day and age when most found-footage/1st-person POV horror films seem content to take the lowest road possible, The Den bucks the trend and goes for something a little more ambitious. While the film probably won’t be considered a modern classic (it’s ultimately just a little too narrow-focused to be as effective as it could be), it’s a thoroughly effective, chilling and thought-provoking film and one that certainly bodes well for Donohue and co-writer Lauren Thompson’s future projects. If nothing else, The Den will surely give viewers something to think about the next time they get a friend request from some anonymous person and wonder just who might be on the other end of the ones and zeroes.