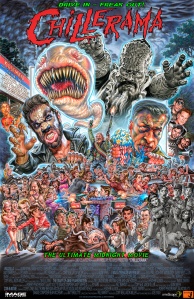 I have absolutely nothing against offensive, abhorrent, socially-unacceptable humor: after all, I was raised on a steady diet of Mel Brooks, Troma, South Park and Italo-splatter films, so stuff like that is part of my cinematic DNA. When done well (and fearlessly), crude, rude humor can be a powerful tool, cutting through societal niceties in a way that allows filmmakers to make honest, pointed commentary about the less-than-perfect world we live in. Racism, sexism, gender politics, religion: these are but a few of the hot-button topics that fearlessly unflinching comedy can often handle in more powerful ways than more dramatic works. All this is by way of saying that I’m most definitely neither a prude nor an easily-outraged mouthpiece for the censorship of deviant ideas.

That being said, the multi-director horror anthology Chillerama (2011) is a complete and total piece of shit, a waste of both time and resources that manages to entertain for a scant 20 minutes out of an astoundingly painful two hour running time. This was a film that managed to lose me early, yet irritated me so profoundly that I was determined to sit through its wretched excesses in order to see how much more irritated I could become. This towering testament to scatological humor in all of its nasty, sticky excesses is both lazy and stupid, too cheaply made to be effective, too sloppily conceived to be entertaining and too needlessly offensive to be anything more than the foot-stomping tantrum of a collection of filmmakers that must, surely, fancy themselves more clever than they really are. Ultimately, my overall impression of the film can be summed up in one tidy, little declaration: I was not amused.

By their very nature, cinematic horror anthologies are always pretty safe bets for entertainment: the stories usually aren’t very long, so they don’t wear out their welcome, and they usually feature punchy twists and plenty of surprises to keep the audience guessing. In the past, I’ve watched anthologies where the current tale failed to grab me, yet my anticipation for upcoming stories would pull me through the rough patches. No such luck in Chillerama: as each fetid tale unfolded, I was only left with the sinking suspicion that each subsequent short would only be worse than the preceding one. In a feeling that Dante could certainly understand, I had abandoned all hope after entering the miraculous world of Chillerama.

Here’s what we get with this lovely little anthology film: a wrap-around segment involving horny zombies fucking and eating everything that moves at a drive-in movie theater (Zom-B-Movie, directed by Joe Lynch); a take-off on ’50s monster movies featuring a sperm that grows to the size of a house (Wadzilla, directed by and starring Adam Rifkin); a parody of ’60s surf-flicks that equates homosexuality with lycanthoropy (I Was a Teenage Werebear, directed by Tim Sullivan); an intermingling of Anne Frank and Universal Studios (The Diary of Anne Frankenstein, directed by Adam Green); and a “hilarious” send-up of scat films (Deathication, directed by Joe Lynch under the “hilarious” pseudonym, Fernando Phagabeefy).

From a purely conceptual-level, there’s no reason Chillerama shouldn’t have worked. The capsule descriptions for each short promise, at the very least, that they’ll be anything but boring. On their own rights, each of the film’s writers/directors have plenty of individual merits: Rifkin wrote and directed the ’90s cult classics The Invisible Maniac (1990) and The Dark Backward (1991), before going on to make more mainstream films like Detroit Rock City (1999) and Night At the Golden Eagle (2001); Sullivan was involved with the low-budget ’80s cult classic The Deadly Spawn (1983) and went on to write/direct the effective chiller Driftwood (2006); Green is the creator of the Hatchet series, one of the more interesting, effective modern horror franchises, as well as the subtly effective Frozen (2010); and Lynch directed the long-delayed but well-reviewed Knights of Badassdom (2013). The film features appearances from such genre greats as Ray Wise, Lin Shaye, Eric Roberts, Kane Hodder, Richard Riehle and AJ Bowen. And, most importantly, each short only clocks in at about 20-odd minutes. With all of these factors involved, what are the chances that Chillerama ends up being utterly and completely worthless? Unfortunately, the chances end up being pretty damn good.

As already mentioned above, there are a nearly limitless range of issues that help to scuttle the film but if I had to pick out my personal reason for this massive trainwreck, I lay the blame fully at the feet of the film’s lowest-common denominator obsession with scatology in all of its wonderful forms. Despite any pretensions otherwise, the entire point of “Wadzilla” becomes the final bit where the colossal sperm is blown-up and proceeds to coat the entire city with about 10,000 gallons of jizz: if you really enjoy seeing actors getting doused with buckets of fake spooge, this will, undoubtedly, be your Citizen Kane (1941). Any salient points that “I Was a Teenage Werebear” makes regarding homophobia are obliterated by things such as the forced rape of a character via baseball bat and ridiculously sub-Troma gore effects. “The Diary of Anne Frankenstein” comes out head-and-shoulders above the others simply by virtue of featuring actual jokes: despite being a little rough around the edges, it’s virtually a masterpiece compared to the others. “Deathication” is a minutes-long goof that features truly nauseating depictions of scat-play (staged, I’m hoping) and was the only short I had to fast-forward through: I like shit in films to be off-screen, thanks very much, although I’ve always laughed at Spud’s little “accident” in Trainspotting (1996). The wrap-around story, “Zom-B-Movie,” gets a big kick out of equating pseudo-pornographic humping with extreme gore, delighting in moments like a zombie plucking out an eyeball and “servicing” the hole or a wife zombie ripping off and eating her husband zombie’s penis. This particular short’s only grain of ingenuity comes from the fact that the blood in the segment is depicted as neon-blue fluid, like the inside of a Glo-stick. To be honest, it’s a simple concept that’s light-years beyond anything else in the film, “Diary of Anne Frankenstein” notwithstanding.

Look, here’s the thing: I didn’t hate Chillerama because it was offensive, scatalogical and stupid…I hated the film because it was all of these things AND poorly-made, sloppy, lazy and mean-spirited. There are plenty of ultra-low budget horror films out there that try their hardest, despite their limitations: Chillerama ain’t one of ’em. At the very least, it looks like the cast were all having a great time, so that must count for something (poor Lin Shaye even appears in two separate shorts, bless her heart). Sprinkled throughout the film are little inklings of the production it could have been, had anyone involved cared to make anything more than a tasteless goof. More than anything, Chillerama strikes me as a classic case of wasted potential, not least since it completely squanders the first gay-themed anthology short that I’ve seen in, quite possibly, forever. I mean, c’mon: the damn film squanders Ray fuckin’ Wise, for god’s sake…how do they live with themselves?

Ultimately, I haven’t felt as let-down by a film as I have by Chillerama in quite some time. Even though I enjoy the individual filmmakers’ work, to a greater or lesser degree (I actually really like Green’s films, especially the vastly under-rated Frozen), this was nothing but a complete disappointment. If you’re so inclined, check out Green’s short, which manages to hit some nearly Mel Brooksian levels of absurdity, mostly thanks to a truly inspired performance by Joel David Moore as a very stupid Hitler. Other than that (relative) high-point, there is absolutely no reason whatsoever to recommend Chillerama. If you want an intentionally bad movie, go watch Sharknado (2013): at least that has a totally wacked-out Tara Reid to recommend it…all Chillerama features are a bunch of bored jokesters playing chicken with the audience. My advice? Don’t take the bet.