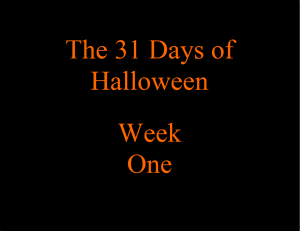 With the previous flip of the calendar page, we now find ourselves at a very special place: the beginning of the 31 Days of Halloween. After much thought, I’ve finally nailed down the lineup for this week’s viewings. Without further ado, here’s the first batch:

Despite wanting to begin October with the screening of Halloween and its sequel, I’ll need to actually start with a pair of my favorite films: TCM 1 and 2. There will probably be a few films added to Sunday, as well, possibly a separate double-feature, if time allows.

As in the past, the first week features a mix of old favorites and unseen films, with one exception: Halloween II. Although I’ve seen the film several times over the years, I’ve never warmed to it. Since my last screening was at least a decade ago, I figured this was as good a time as any to dust it off and give the film one last shot. Tastes change, so perhaps my tastes are more aligned with the film’s aesthetics, at this point. Of course, the movie could also be a stinking pile of crap: we’ll find out one way or the other tomorrow night.

My “Foreign Horror Films” screenings for Sunday might also include a few ringers: I have a sneaking suspicion that neither Post Tenebras Lux or I’m Not Scared are completely horror films. Should this end up being the case, I’ll sub in a few others to help even the score.

Minor issues notwithstanding, this is the beginning of what promises to be a very interesting October. Stick with us, enjoy the ride and, hopefully, you’ll pick up a few new seasonal favorites of your own. As always, don’t hesitate to leave your thoughts and opinions on any of the screenings: I’m always curious to know what others think of these films.