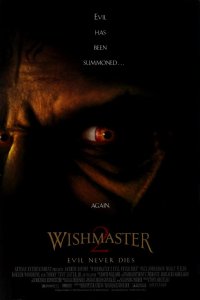 The original Wishmaster (1997) was a gory, cheesy but irrepressibly fun B-movie that served as a showcase for special-effects/makeup wizard Robert Kurtzman. In many ways, the film was similar to executive producer Wes Craven’s iconic Nightmare on Elm Street (1984): both films were special effects extravaganzas that featured charismatic, talkative maniacs who killed their victims in fantastic way and both films blurred the line between fantasy and reality. It wasn’t much of a surprise, then, when Wishmaster proved successful enough to warrant a sequel, albeit a direct-to-video one. Would this upstart series go on to achieve the same kind of cultural resonance as the Nightmare on Elm Street films? We’ll take about the truly dire follow-ups in an upcoming post but let’s see how this ever-important sophomore effort fared.

There are many ways to do a sequel: immediately continue the previous storyline, put the previous characters into new situations, put new characters into the same situation or just re-do everything from the first film with a fresh coat of paint. Of these various scenarios, I’m obviously happiest with those that continue to expand on and flesh out the characters/villains: after all, what’s the point of just watching the same thing over and over? While I’ll always enjoy the Friday the 13th series, it will never have the same resonance for me as the Nightmare on Elm Street series, mostly because of the sheer variety offered in the latter. Nevertheless, either tact is valid, as far as I’m concerned.

Jack Sholder’s Wishmaster 2 (1999) opts to take a slightly different, more dangerous path: it simply remakes the original film in a slightly different, much less successful fashion. While this tactic worked exceptionally well for Sam Raimi’s Evil Dead (1981) and Evil Dead 2 (1987), Sholder is no Raimi. Whereas Raimi was able to come at his “remake” of Evil Dead from a different angle, playing up the more darkly comic moments, Sholder simply replays all of the beats from the first film with different locations, lesser actors (with the exception of returning Andrew Divoff) and much less interesting setpieces. Let’s be honest: no one is going to Wishmaster for the detailed, intricate storyline: they’re going for the eye-popping, crazy, wishing scenes. When the death scenes are lackluster, it just makes the audience focus on the rest of the film which, unfortunately, is kinda shabby.

We begin in a familiar place, with the Djinn (Andrew Divoff) trapped inside the jewel, which is trapped inside the stone statue of Ahura Mazda. This time around, a pair of bumbling thieves end up breaking the statue during a shoot-out with the museum’s security. During the shootout, Eric (Chris Weber) is gut-shot but his girlfriend, Morgana (Holly Fields) manages to kill the guard and get away. Eric ends up releasing the Djinn and wishes he were never born, due to the pain he’s in: the Djinn makes Eric regress back to an infant before blinking out of existence. The Djinn is now free and has his eyes set on Morgana (the first person to touch the jewel). From this point on, the film follows almost the same path as the first film: the Djinn pursues Morgana, trying to get her to make three wishes so that he can take over the world. Morgana resists and everyone around her slowly succumbs to the Djinn: this all leads to a big setpiece where the Djinn unleashes his powers on a large group of victims (the first film had two such scenes, both occurring at fancy parties) before being ultimately foiled and sent back to his jewel-prison. As in the first film, banishing the Djinn ends up undoing all of the deaths he caused, giving the first two Wishmaster films both very high and very low body counts. Cue the Djinn looking pissed and…prepare the next sequel.

Let me make one thing clear: compared to the abominations that would follow, Wishmaster 2 is a completely worthy follow-up to the original film. Divoff turns in another stellar performance as the Djinn, although his delivery here is a little jokier and more Freddy-esque. The rest of the cast is broad but serviceable, although Holly Fields makes an awful protagonist (she’s so whiny and obnoxious) and Paul Johansson’s Father Gregory is one of the most ludicrous creations in the history of bad films. We also get what has to be the single worst performance from Tiny Lister ever, as a ‘roid-ragin’ prison guard, but I’m not so sure that he wasn’t told to play to the cheap seats, since many of the actors are way over the top.

The biggest issue with the film is how completely lackluster it is. When the Djinn is sentenced to prison (don’t ask), I had high hopes that we were going to get a Wishmaster film set entirely within a prison: talk about a captive audience! To be honest, this is a pretty great idea and might have made for a really interesting film. Instead of following through with this, however, we get a few lame deaths in the prison (although the one where the Djinn grants a prisoner’s wish that his lawyer “go fuck himself” certainly wins some points for creativity) before the Djinn escapes. This ends up leading to the actual “setpiece” of the film which takes place at a generic casino and is, essentially, a really watered-down version of the party scene that closed the original film.

None of the deaths in Wishmaster 2 are anywhere close to the ones in the original, whether in terms of effects execution or creativity. A cop tells the Djinn to “Freeze!,” so the Djinn freezes him. Yawn. Tiny wishes that he could get some time alone with the Djinn, to beat the crap out of him: the Djinn wishes him into a small room where he reveals his true form and kicks the crap out of Tiny. Yawn. In one of the most head-scratching moments, another inmate threatens the Djinn, saying that he wants a cut of his action: he wants all his “drugs” so that he can get “wasted.” In response, the Djinn makes the guy’s henchmen start karate-kicking him: the expression on my face was probably more amusing than any one-liner in the entire film.

There’s also an exceptionally odd and intrusive religious angle that plays throughout the film, similar to what some of the terrible Hellraiser sequels have done. Morgana’s ex-boyfriend-turned-priest Gregory is always trying to get her to convert and it’s stated again and again that she needs to be pure in order to fight the Djinn. In a truly odd scene, Morgana removes all of her piercings, makeup and jewelry, chops off her pinkie finger (for atonement?), dresses conservatively and returns all of the artwork that she stole. Apparently, she’s now pure. It’s an odd, nonsensical moment that manages to feel completely at home with the rest of the film.

Ultimately, Sholder’s film is pretty anemic, even if it’s still noticeably a Wishmaster film (wait’ll we get to those final two installments…). This is kind of strange, considering that Sholder was responsible for two of the most batshit films of the ’80s: A Nightmare on Elm Street 2 (1985) and The Hidden (1987). While NOES 2 is a train wreck and The Hidden is a pretty decent sci-fi/horror curiosity, neither film could be accused of being boring or conventional. Perhaps Wishmaster 2’s greatest sin is that it’s so middle-of-the-road: too well-made to be completely risible, too generic to stand out in a crowd. If you’ve got a rainy day to kill, set yourself up a double-bill of Wishmaster 1 and 2: while the sequel wasn’t the best way to put the series to pasture, it was sure as hell a more respectable way than the two follow-ups.