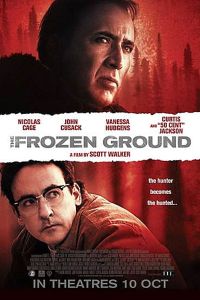 Although I have a tendency to rail on (and on…and on…) about how much I dislike unoriginal films, there’s certainly something to be said for a no-frills, back-to-basics movie that just wants to tell a story. In particular, I tend to have a weakness for scrappy little police procedurals, especially ones that feature a determined cop squaring off against a cagey, ruthless serial killer. These films are often nothing extraordinary but, when done well, can be just as tense and illuminating as something for original or mind-bending. In recent times, Spike Lee’s Summer of Sam (1999) and David Fincher’s Zodiac (2007) both fit the bill pretty well: while neither one blew me away, they were both solid, respectable and consistently watchable films that were full of incredibly solid performances. The newest member of this particular club would have to be first-time writer-director Scott Walker’s The Frozen Ground (2013), based on a true story about a serial killer who stalked the Alaskan wilds in the ’80s. Although there’s nothing spectacular here, The Frozen Ground ends up being a solid, well-acted and, occasionally, quite powerful little film.

Beginning with a quote from Matthew 10:16 (“Behold, I send you forth as sheep in the midst of wolves”) and a stunning aerial view of the dark, slightly sinister Alaskan wilderness, The Frozen Ground wastes no time in throwing us into the story. It’s 1983 and the police have just raided an apartment where they’ve found a bloody young lady (Vanessa Hudgens) handcuffed in a bathroom. She tells the police that her abductor planned to put her in a plane and take her to his remote cabin. They don’t buy her story, however, which leads us to the “chase” proper. Jack Halcombe (Nicholas Cage) is an Alaskan State Trooper who’s determined to track down the madman responsible for killing prostitutes and dumping them in the middle of nowhere. Halcombe suspects Bob Hansen (John Cusack), a well-liked local businessman who seems the very picture of small-town celebrity: whenever he walks into a place, it’s like Norm walking into Cheers. No one, of course, is willing to admit that there might be a dark side to this beaming pillar of the local business community.

But they should, of course, because Bob is batshit crazy. This isn’t much of a secret, to be honest: the film never makes any bones about Hansen being the baddie and Halcombe is always suspicious of him. Like real-life cases, however, figuring it out is only part of the puzzle: the bigger issue is proving it. To that end, Halcombe will need to track down Cindy Paulson (Vanessa Hudgens), the only known survivor of the killer. Problem is, Cindy is a notorious drug abuser and still hooks, making her a little difficult to track down. With the help of Sgt. Lyle Haugsven (Breaking Bad’s Dean Norris), Halcombe gets to tracking down Cindy. Time is running out, however, because Bob has decided that it’s time to tie up loose ends and Cindy is the first name on the list.

While there’s nothing extraordinary or surprising about The Frozen Ground, there’s also nothing particularly wrong with it, either. The story hits all of the familiar beats that you’d expect in something like this, the cinematography is suitably dark and foreboding (when it needs to be) and the acting, for the most part, is pretty high-caliber. In particular, Nicholas Cage does a phenomenal job as the determined State Trooper, reigning in all of his over-the-top tendencies to create a character that feels completely and wholly real. I really like Cage: he seems like a really cool, self-aware dude and somebody who’d probably be a blast to joyride with. As an actor, however, I find him to be in the same basic boat as Gary Busey: for the most part, he just seems to play variations of himself in everything. While this may work in purposefully OTT productions like the awful Ghost Rider movies or that risible remake of The Wicker Man (2006), it’s much more problematic in films that require more low-key, realistic performances. Cage’s turn in The Frozen Ground, for the most part, is completely restrained and, as a result, is probably my favorite performance of his since Matchstick Men (2003). The best compliment I can pay him, regarding this performance, is that he never once took me out of the film: at no point did I go from watching “Jack Halcombe” to “Nic Cage,” unlike pretty much anything from the last 10-15 years. He’s completely excellent here and the film is worth a watch if for nothing else than an opportunity to see Cage under-act, for a change.

Cusack, on the other hand, has always been a more problematic actor for me. I really enjoyed him, up to a point, but it seems like he’s been spinning his wheels for years, playing variations on the exact same character in everything he does. While he’s not quite that anonymous in The Frozen Ground, he’s also not particularly note-worthy, save for one exceptionally unpleasant scene where he mentally tortures one of his victims. If any, Cusack seems a little checked out here, although there’s nothing overtly wrong with the performance: it just seems a bit perfunctory. Curtis “50 Cent” Jackson appears as Cindy’s pimp and he’s not bad, although it took me a while to recognize him under one of the silliest long-hair wigs I’ve ever seen. Dean Norris is predictably solid as Halcombe’s sort-of partner but I wish he had more screen time: Norris is one of those actors who’s always doing interesting things with his face and body language yet seems doomed to play character roles for the rest of his life. I really hope this isn’t the case: it would be nice to see him carry a film, one day, rather than providing able backup.

The one sore point in the film, if there could really be said to be one, would definitely have to be Hudgens’ performance. I will admit that I’m not a fan of her’s in the slightest but I was still willing to give her the benefit of the doubt: after all, who could’da thunk that David Bowie would turn out to be such a great actor? Alas, Hudgens is no Bowie (this would make a great T-shirt, by the way) and her performance as Cindy indicates that she’s not much of a thespian, either. All weird tics, awkward line delivery and uncontrolled emotion, Hudgens didn’t work for me at all. This, of course, is a little worrisome in a film where her character is supposed to serve as the emotional core. As such, the film seems to exist around her but she’s never fully integrated into anything. It’s the equivalent of grabbing an audience member to sub for a sick Broadway performer: the show might go on but it won’t feel quite right.

On the whole, fans of these kinds of movies will find plenty to appreciate in The Frozen Ground. While the story is far from original and is precipitated on one of those Matlock-esque “I shoulda killed you when I got the chance!” outbursts, it’s frequently tense, extremely well-shot and moves purposefully towards its conclusion. In a way, it’s kind of refreshing to watch a film like this that just tells a linear A-B story, without the need to muddy things up with extraneous flashbacks, flashforwards, voice-over narration or excessive emotion. If The Frozen Ground were a mid-term, it would probably get a B. If you were a particularly lenient instructor, however, I see no reason why that B couldn’t be upped to a B+. Just don’t go into this expecting Hurricane Nic: in this instance, Cage left the persona at home and just brought himself to the party.