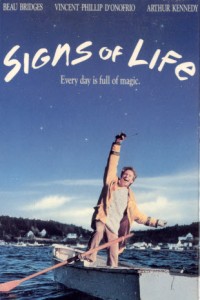 It’s a fact of life, for better or worse, that nothing really stays the same for very long. This can be a good thing, of course, because it means that all bad things must someday end: dictatorships, prejudices, awful politicians, terrible people…if nothing else, no human can live forever (yet) and the bad ones, like the good ones, must one day go. On the other hand, this constant state of flux means that none of the good things will stay around forever, either: happiness, wealth, health, youth, your favorite band or even the planet Earth…these may all be here today but, as sure as the sun currently rises and sets, there will be a time when they’re not around any more. We all must deal with changes like this: how we deal with these changes, however, is what makes all of us unique. John David Coles’ Signs of Life examines what happens when, in effect, life closes one door…and opens another.

Owen Coughlin (Arthur Kennedy) owns a small ship-building business in a small Maine town, a business which employs many of the local residents, including John Alder (Beau Bridges), brothers Daryl and Joey Monahan (Vincent D’Onofrio and Michael Lewis), Eddie Johnson (Kevin J. O’Connor) and Mrs. Wrangway (Kate Reid). Business has not been good and Coughlin has just sold his last ever boat to a large family of Italian fishermen. “We did a good job…now we’re out of business. No one wants what we’re building,” he tells his employees, shoulders slumped in defeat. This is the end of an era, as well as a way of life, and everyone knows it.

After the bombshell drops, Coughlin’s employees are left scrambling to pick up the pieces of their lives. Best friends Daryl and Eddie want to head out to Florida to become salvage divers (despite Eddie’s inability to swim), second-in-command John has several daughters and a very pregnant wife (Kathy Bates) who’ll deliver another one any day now and poor Mrs. Wrangway just wants to make sure that this doesn’t destroy old Owen. As often happens, there are complications everywhere they look: Daryl’s brother is mentally impaired and relies on Daryl to take care of him, Eddie’s girlfriend Charlotte (Mary Louise Parker) absolutely does not want him to leave, and John has just stolen a wad of cash from his shitty, condescending brother-in-law Ernie (Ralph Williams). As Coughlin experiences a complete breakdown, feeling all of his years of hard work unraveling into nothing, he’s pestered by a persistent stranger, played by Will Patton, a stranger that may just hold the key to Owen’s past (and future). “Looks like you’re done building boats,” he laconically tells Owen. But is he? Do we ever really give up our passions, even if they no longer work for us?

Signs of Life, for the most part, bears all of the indicators of a Hallmark Movie of the Week: gauzy, misty cinematography; large, ensemble cast filled with familiar faces; quiet, pensive mood; bucolic setting; relationship/family struggles; the past intruding into the present. Truth be told, Signs of Life is rarely, if ever an original film, although that doesn’t prevent it from being a decent film. The biggest problem, ultimately, is that the film comes across as relatively low-stakes, despite the obligatory “racing to save a loved one from danger” scenes. The film’s pace is so measured and relatively even that it has the tendency to lull one into a semi-aware state: there’s nothing happening here that really needs to be thought about, merely experienced. All of the old familiar beats are here: relationship struggles (Eddie vs Charlotte), familial struggles (John vs Mary Beth), struggles with the past (Owen vs the stranger), fraternal conflict (Daryl vs Joey), secret loves (Owen vs Mrs. Wrangway), man vs society (John vs his brother-in-law). As a whole, Signs of Life does nothing new with any of these angles: even the introduction of a magical-realist element doesn’t do anything to elevate the story, merely moving it in a direction that feels like a far lesser Milagro Beanfield Wars.

For the most part, director Coles has been a fixture behind the scenes of various television shows since the early ’90s: Signs of Life was his first (and, to this point, only) feature film and it shows. Many of the beats in the film feel more suitable for a TV movie and the conflicts are all pretty straight-forward and easily resolved. The one real head-scratcher, though, has to be the complete dismissal of John’s storyline. After having him steal and lose the money, the film essentially abandons John, leaving the audience to wonder just what the hell happened to him. Did Ernie get him arrested after all? Did his wife leave him? Did everything end up as rosy for him as it did for the others? It’s a weird development and smacks of key scenes being left on the editing room floor…or never being filmed in the first part, which is definitely the bigger sin.

At the end of the day, Signs of Life isn’t an awful film but it ends up being terribly generic and unoriginal, which may be just as bad. If you’ve been paying attention, there shouldn’t be any surprises at any point in the running time (if you figure out that John storyline, though, drop me a line): there also won’t be a whole lot to remember, to be honest. Signs of Life is a decent film with a good cast doing decent work. If you’re looking for average, middle-of-the-road entertainment, you’ve come to the right place.